Back in early 2016, we decided to approach our holidays very differently. In previous years we just waited to see what space we had in our diaries and booked a last minute trip. The problem with that was we hadn’t saved enough money to go anywhere worthwhile. Certainly nowhere on the bucket list.

So with a new plan to book trips waaaay in advance, we took the plunge to book a trip that we’d initially planned to do five years earlier.

The plan was an 18 day trip around Vietnam, Cambodia and Thailand.

After spending a few days in Amsterdam (our annual, November tradition) we flew back to Newcastle on the morning and headed out to Vietnam the same day. The day we arrived back from Amsterdam was the day of heavy snow, so after a two hour wait on the tarmac, we set off on our latest adventure.

Where did we go?

We flew with Emirates business class which was exceptional and well worth the money. The feeling of luxury while being pampered from A to B was amazing. We began by flying into Hanoi in the north of Vietnam. 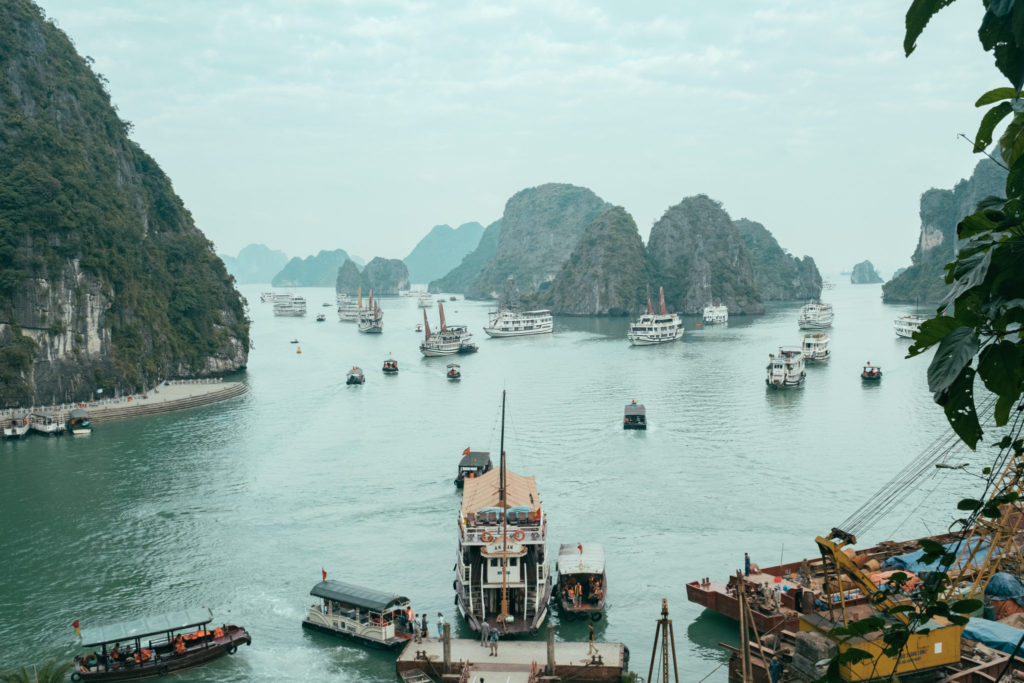 Upon arrival in Hanoi, we spent out first evening wandering around the streets, trying our best to soak in the hustle and bustle of the market. It was within the first half an hour on the streets where I found we’d been scammed out of some money. It wasn’t much, but it certainly reminds you of the struggles that some people face over there.

After another chill day in Hanoi, we headed out to Ha Long Bay to see if it was as amazing as it looked in the photographs. The good news was that it most certainly was, the only awakening being the amount of tourists there. We couldn’t really complain being tourists ourselves, but it certainly proved a big eye opener for how we would approach our travels in the future.

We spent the night on a boat with a chef cooking our meals and the following day headed out to several locations. One of our favourite sights was when we both kayaked around a cove in the bay. Again, it was a bit too touristy for our liking but the experience was one we’ll never forget. Just the two of us in that kayak in the setting… it was a great moment for us.

The next stop after Hanoi was Hoi An, located in the centre of Vietnam. We’d heard many good things about this place and upon our arrival we spend the first evening walking around the local town and sitting by the river having a drink watching the world go by. We’re both big people watchers, so it was fascinating to see all the different faces walking by.

The next day, we hired some scooters and drove up to Hai Van Pass. This road was made famous in the Top Gear episode where the team rode up through Vietnam on scooters. It was what hooked us on the idea of Vietnam originally, so it was great to experience this ourselves.

The roads up to the pass were long and windy, which was perfect for us both. We visited some sites which showcased the aftermath of the war. Buildings riddled with bullet holes were sadly a common occurrence.

After the epic ride through the mountains, we grabbed some lunch and made our way back to Hoi An, with our final stop at a beach where our guide took us to watch some fishermen at work.

They were catching everything in nets by hand. It was incredible to see how these people made a living with the bare minimum of tools.

Our final stop in Vietnam was Ho Chi Min City (or Saigon as it was once called). Everyone warns you of the pollution in the city but nothing can quite prepare you for it. It was noticeably warmer in the South and coupled with the pollution made for difficulties breathing at times, but the city was so full of life you couldn’t help but be in awe.

We did take time while we were there to visit the Cu Chi Tunnels and the Mekong Delta. Both were well worth experiencing in order to gain a sense of what life may have been like for the locals. You can never truly understand, but to see these wonders for yourself is a once in a lifetime opportunity. 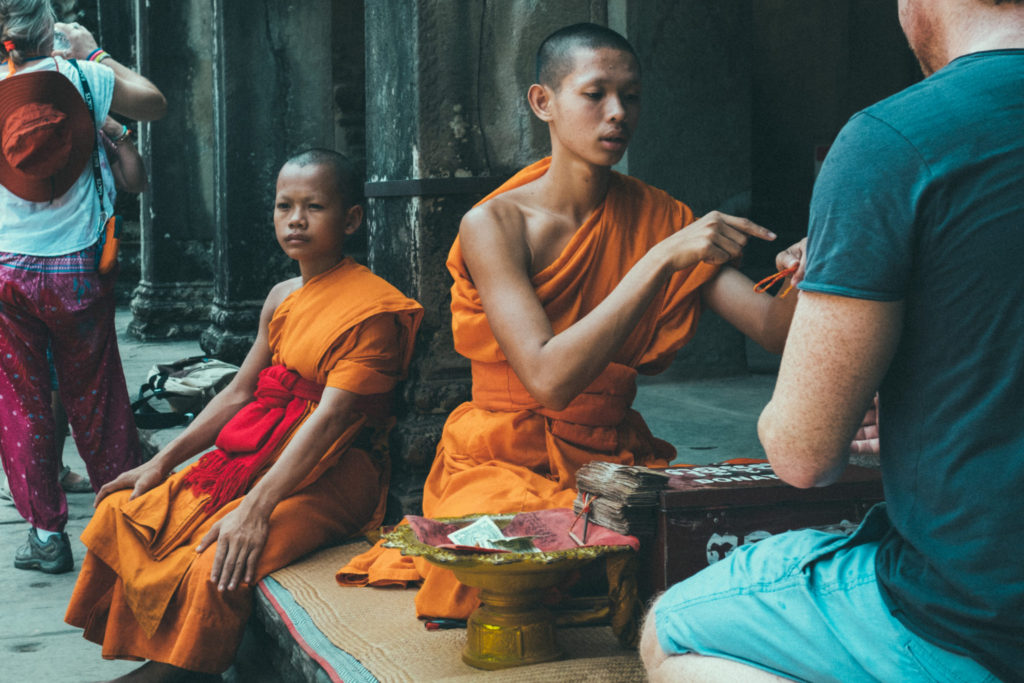 Our next stop was a three day layover in Siem Riep. This was simply to check out Angor Wat and the surrounding temples. The first thing that struck us was just how nice Siem Riep airport is. It’s beautiful.

There was a noticeable change from Vietnam and we spent much of our time there being hassled. I know, what else could we expect. I’d never begrudge anyone trying to make a living and a life for themselves, but how many tuk tuks could one need in the space of a 100 yard walk.

The temples however were amazing and everything we had hoped for. Being able to reach out and feel the stone instead of just looking at it in a photograph is the kind of experiences we’d hoped to have when we started Chocolate Chip Photography.

Our favourite was the “tomb raider” temple which was breathtaking. Trees that stretched up into the sky and such skilled building that you couldn’t help feel small against the scale of the temples. 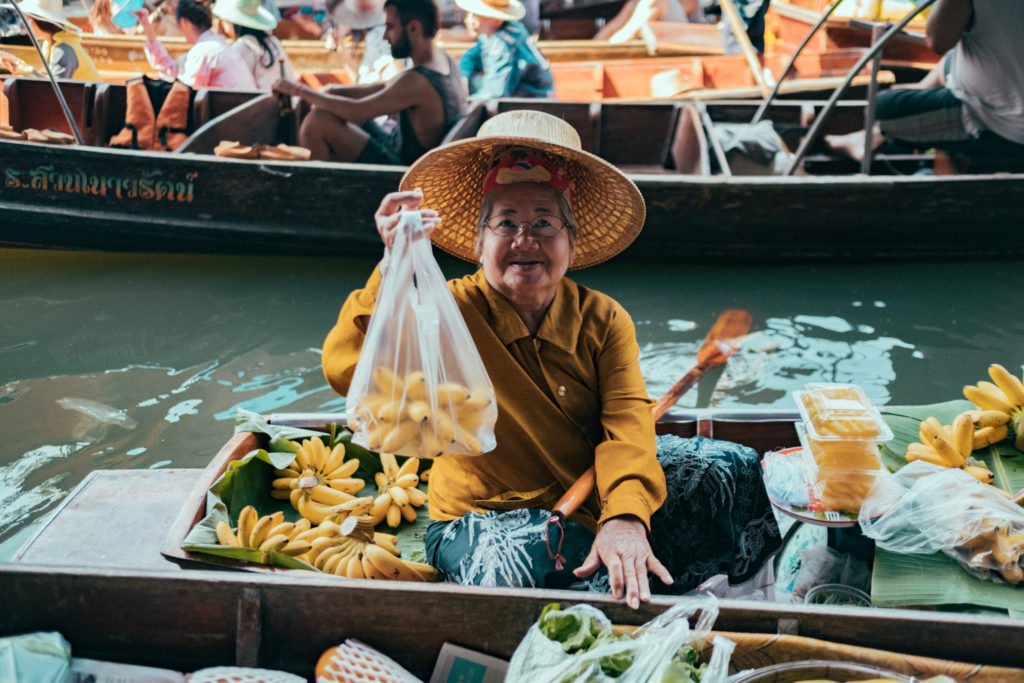 Our final stop on our trip was Bangkok. We were only there for three nights so had a lot to fit in.

We spent a day visiting the railway market and the floating market. We had a private guide who explained everything and helped us along the way.

The railway market was our first stop and literally within two minutes or arriving there, a train arrived. The way it works is that all the locals set out the market stalls on the train tracks. It’s not just stalls though. Cafes, tables, chairs… everything. Then when the train comes through, everyone picks up their belongings and stands to the side and once the train has passed they resume their business. Cool, right?

After this we went to the floating markets.

The markets were buzzing. People everywhere and that wasn’t just the tourists. Locals coming to do their shopping. The boats made their way down the rivers, selling various different goods. We made our way through and tried our best to soak everything in, but there was so much going on it’s just impossible to do so.

This was one of the highlights of the trip and made a great opportunity for us to photograph locals living their life. Amazing.

It was the following day that we headed home but we felt like we’d experienced some amazing sights and really gathered a sense of the spirit of the countries we’d passed through.

We’ve added a lovely selection of photos from our trip showcasing the highlights, as well as a video of our journey up the Hai Van Pass. Please enjoy them…

If you’ve enjoyed our travels and are interested in booking us for your wedding, please take a look at some more information by clicking here

You can find out more about which cookies we are using or switch them off in settings.

This website uses cookies so that we can provide you with the best user experience possible. Cookie information is stored in your browser and performs functions such as recognising you when you return to our website and helping our team to understand which sections of the website you find most interesting and useful.

Strictly necessary cookies should be enabled at all times so that we can save your preferences for cookie settings.

This website uses Google Analytics and Facebook Pixel to collect anonymous information such as the number of visitors to the site, and the most popular pages.

Please enable Strictly Necessary Cookies first so that we can save your preferences!